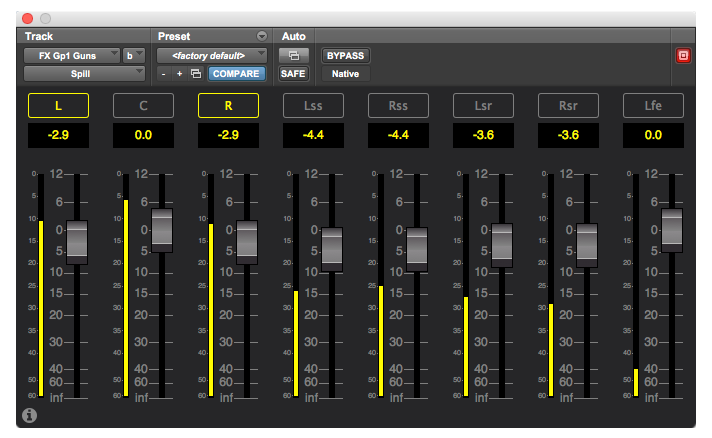 The Spill plug-in can be inserted on any multi-channel Pro Tools track, aux or master, from stereo to 7.1 format. All channels are spilled to individual channel faders in the Spill plug-in window, the V-PlugIn remote control app, and Avid control surfaces. Spill channel faders can be adjusted individually or can be relative grouped for fast and easy adjustment of surround channel groups. Spill fully integrates with Pro Tools plug-in automation modes providing a complete, professional surround mixing solution like that found on high-end film consoles.

The V-PlugIn remote control app for iPad and iPhone supports the Spill plug-in for first-class control. It provides a list of tracks using Spill so a user can just tap the track name and have instant access to channel levels without needing to open a plug-in window on the computer. V-PlugIn operates on any number of iPad or iPhones simultaneously which can connect to the Pro Tools computer using a wired Lightning cable connection or a WiFi connection. 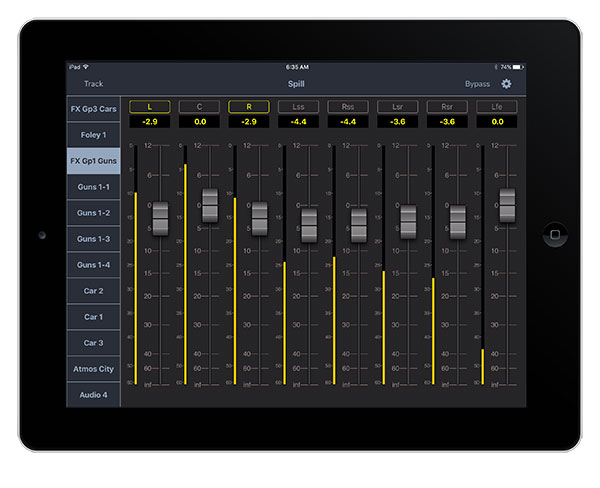 V-PlugIn shown controlling the 8 channels of a 7.1 track in Pro Tools with the Spill plug-in  – click image for high res version

Re-recording mixer Tom Marks, CAS, provided feedback to Paul Neyrinck during development of the plug-in. “Spill is applicable to both mixing and editing workflows but is most valuable during the final mix. In very busy sound effects sequences, you can quickly adjust a specific channel(s) of a pre-dub to clear space for music or to get the sound effects to poke through. When given multi-channel stems for the score, you can bring up the surrounds or lower the center channel. There are also applications on a global level. For example, if you start a mix in a smaller room and move to a large dub stage, you may need to make global adjustments on the surround or LFE levels. Also when doing near-field home video versions, you’ll have to make adjustments to your stems which Spill is perfect for.”

Spill can be downloaded from the Neyrinck website which includes a 7-day free trial. Spill perpetual iLok license can be purchased for $132 from the Neyrinck store and includes an annual license for the V-Control Pro Bundle that provides connectivity between Spill and the free V-PlugIn app, available from the Apple App Store.