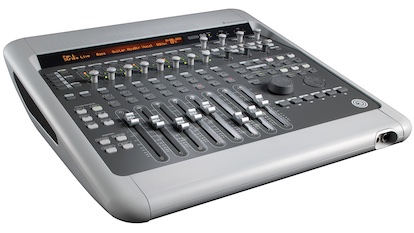 V-Control Pro connects the fantastic Digidesign 003 Console surface to Logic Pro, Cubase/Nuendo, Studio One, LUNA and many other DAWs and media applications on Mac Intel and Windows systems. Avid does not provide a driver for Apple Silicon (M1, M2) systems so it can not be supported.

The 003 Console requires Avid’s last driver update to be installed on Mac Intel and Windows systems (003 is not supported on Apple Silicon M1/M2 systems). For Windows systems and Mac OS Catalina and earlier you can get the driver HERE. Please note that their site indicates Sierra as the last Mac OS supported. They stopped testing after Sierra and do not support it after Sierra, but it still works with later versions of Mac OS.

For Mac OS Big Sur and later, Avid’s driver installer is not compatible with Gatekeeper. The driver files are compatible if manually installed. We made a utility helper that makes it easy to install.

V-Control Pro connects 003 to the DAWs listed below. Click the Compatibility Chart button below to see the latest compatibility details.

1. Get a free trial license HERE.
2. Activate the trial license to your machine or iLok USB key using iLok License Manager.
3. Download and install V-Control Pro HERE
4. Follow the setup instructions in a browser HERE or on YouTube.

Please join our Facebook V-Control Pro Users Group and let us know what DAWS and surfaces you want to connect. Stay informed about new surfaces and features in V-Control Pro with our e-mail newsletter. We will never sell your info to anyone. We will not spam you with unnecessary e-mails. Just solid, useful information.